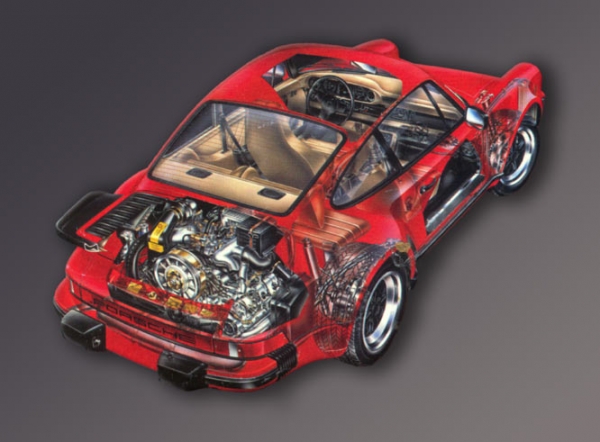 Your favourite Porsche specialist JMG Porsche has been looking at one corner at Oulton Park recently with more scrutiny than usual.

Following some recent testing at Knicker Brook this one corner became the nemesis of one of our drivers in a 930 Turbo driving the international circuit.

On testing his time for the circuit was great, but he was sure that he could tidy up this one corner and its chicane. The problem is this corner and chicane complex come at the end of a long straight and before another straight, being a sequence needing second or third gear, but neither gear being ideal for the 930 power delivery, it was clear that this corner could be worth a second per lap overall, not just because of the time spent in the corner, but the time spent being out of the power band of the laggy 80's Porsche turbo.

The compounding problem of this corner was the weight distribution of the 930 Turbo. Basically an 80's 911 with a very larger turbocharger and massive intercooler attached to it, our 930 Turbo is a rocket with wheels attached to it, however at 403 BHP at only 0.7 Bar of boost, with most of the weight at the rear of the car the problem is one of weight transfer. Weight transfer left to right at the rear during cornering which naturally wants to push the rear wide as well as weight transfer front to rear.

The problem with the weight transfer under braking or trailing throttle is that it causes much of the weight to transfer to the front wheels, unfortunately with the Porsche, if this happens during a corner then there is a large amount of mass at the rear of the car wanting to push sideways, the combination of this is loss of rear traction, just as the rear most needs to retain traction.

Combine these issues with the physics of the 930 with a long fast straight, followed by a bend incorporating a right left right and you can imagine the problem. High entry speeds, leading into a corner chicane which promotes throttle off oversteer on the entry, combined with then the mass trying to change direction another two times. This can lead to either a piroet into the complex, or pendalum effect becoming a real issue on the way through the bend on the other corners within it.

So OK, you get it, the 930 is a handful and knicker brook can be a corner on a track to really highlight the issues of where the physics of this Porsche let it down. But why is this article relevant you are thinking?

Well this corner has always been a problem for this driver and this car, his nemesis as we mentioned earlier. Over the years we had tried everything, the car now has a suspension system that was not even available in the 90's let alone the 80's when this car was made. The performance of the car has been upgraded many times over the years, and with this, all the lap times of Oulton Park have improved drastically, but data-logging showed that this corner was just not getting any faster, but the eventual solution was not in a modification to the car, but in driver mind set, dedication, practice and analysis of his own driving style.

Sometimes, the best modification to your Porsche can be some driver training, or even just driver practice and analysis. Sometimes, rather than just enjoying a track day, you can go through the day working on your track skills and the difference can be as good as a extra 100 bhp. No amount of Servicing, diagnosis, repair or modification can improve a car as much as driver education and skill.

In the end, conquering Brook came down to speed, a little playing with weight distribution while setting the car up to enter the corner, and the driving line through it.

Often drivers will try to be smooth through a sequence of bends, with attempts to find the straightest line through the sequence with the slowest point being on the apex of the last bend often being the direction of attack to service a quick time. 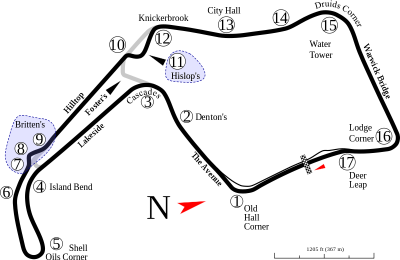 On the advice of Jon Mitchell, leader at JMG Porsche, our driver took a different route, as usual he broke while approaching the bend, but this time with the car in the centre of the track, just before the bend he increased his braking to a slower speed in third gear, smoothly headed left on the track, and then about half a second before he instinctively would want to turn in, the steering was snatched right a little, just enough to begin weight transfer heading left and then he turned into the corner and applied full throttle. Quite a scary prospect for the driver, purposefully unsettling the car, but this caused the suspension to load up onto the outside rear wheel (with the small snatch of the steering) and then weight transfer due to the acceleration entering the corner to transfer all the weight over the wheels that needed the traction most, the ones dealing with the weight.

Once the revs moved up into the powerpand where boost came in, the throttle was lifted a little, just enough to maintain acceleration, which kept the weight on the back wheels through the change of direction on the left chicane and through the final right, where mid point on the apex of the right the throttle was thrust into the floor, the result was a little loss of traction at the rear, with power oversteer, but enough to bring the car fully into boost for the straight, which as the power came on, caused the weight to transfer to the rear, regaining full traction of the rear wheels.

The result looked spectacular, which sometimes is not good for a low lap time, but instead this manoeuvre prooved to knock two seconds off of the entire lap time once practised.

Was he really 2 seconds faster through that corner? Not a chance, he was probably not even in the corner complex for 2 seconds in total, more importantly his time through the complex was reduced by about 0.3 of a second, but his entry and exit speeds were up by 20 MPH and 30 MPH respectively. This additional speed meant that not only did he cover more ground in a shorter amount of time either side of Knickerbrook, but also he was on boost during the exit, rather than boost coming in 1.5 seconds after the exit, we refer to this improvement as being the day his Brookspeed increased on the Porsche. But also this effect is accumulative, once he was using this technique on brook, he was also using a similar philosophy with over corners on the same and other tracks.

The moral of this story is that when the car had previously been modified, one of the stages involved a power increase of some 60 BHP, but that only reduced a lap time by about 0.5 of a second. Mastering one corner had produced the equivalent of about 200 additional BHP, which to be honest, probably would not have been achieved even with 200 additional BHP.

Interestingly, the name of knicker brook has another interersting story. Apparently many years ago two demolishion experts were destroying tree stumps on the Brook corner, then named because of there being a brook running next to it, when suddenly after one explosion, a man and a lady ran off from the undergrowth and reportedly the experts found some knickers in the brook when they investigated what they had been up to. Hence the name "Knicker Brook".

More in this category: « Dorset Porsche sports cars The item you are looking for has moved around within JMG Porsche »
back to top
Copyright JMG Porsche Ltd 2020