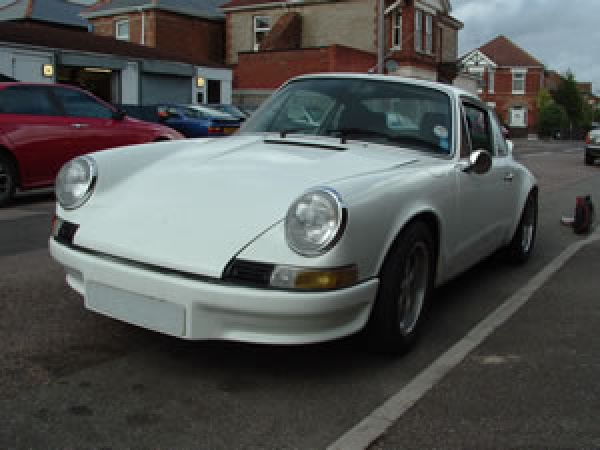 A few years ago a customer came to us following a long two year search for a good 1973 to 1974 911 RS, money was no object, but every example he found had suffered from a 1990's restoration when the car's were worth much less than they were then or indeed now.

He had come to the conclusion that if he had bought one of the poorly restored in the 90's examples, he would have to embark on a complete restoration again, which with a 911 RS can be a massively expensive exercise, even for someone with the means to buy a real 1974 RS.

The customer was also conscerned that if he had a genuine 74's RS restored, he would almost be afraid to drive it.

So having seen what we had done with installing 964 and 993 engines into earlier cars, our customer decided he wanted something that looked like a '74 RS, was as quick or faster than a '74 RS and was as light or lighter than a '74 RS.

So the project brief was set, and we set to work.

Having worked on RS restorations and RS maintenance in the past, JMG knew some of the details that could be improved on, and why certain items were designed how they were, so we were confident that we could not only build the car that the customer wanted, but also to make it better than a '74 RS.

Firstly we needed to find the car to form the basis for this conversion. A 911 SC was the obvious choice, light weight, not rare as to be sacraledge to modify and in plentiful supply. What we needed more than anything, was a good solid shell, which can sometimes be where it is wise to spend a great deal of time making sure we found the right car. Which was eventually found in the form of a dry stored 1982 911 SC that had suffered an engine seizure back in 1990 and had been kept in a barn ever since.

Once the car was secured, work began on stripping it to a bare shell, media blasting and etch priming, which revealed we had indeed made the right choice with this car, once the paint was removed, as well as all the underseal, we had a remarkably sound shell, free of rust and corrosion. Handy because we had expected to have to perform a great deal of restoration work onto any shell we found.

The front wings, were a little crispy due to rust, which was not a problem, as they would not be returning to the car, as wouldnt the bonnet, engine cover, bumpers and valances and doors, as these were being replaced with carbon kevlar items imported from the USA.

As well as the bonnet, engine cover, bumpers, valances and doors being light weight carbon kevlar items, the choice was simple of course to order all these parts as 1974 911 RS items, even down to the duck tail spoiler.

Building a 993 engine is full of options. Options such as capacity, valve sizes, port modifications, camshafts, piston design, con rod type and fueling.So the first thing we needed to do was sit down and have a long chat with the customer to get a feel for what he wanted, how he was intending on using the car, what other cars in the world he wanted to be faster than or as fast as, but also of course, we needed to talk about road manners and of course how the engine should sound.

It was obvious following a long chat that the customer wanted a freshly built engine, not a used engine. He also wanted it to have perfect road manners, improved throttle response over a normal 993, a little more power and for us to optimise the exhaust note, not loud for the sake of it, but carefully selecting the right exhaust components to make sure the car sounds wonderful.

Capacity though, we could easily build the engine as a 3.8 engine rather than a 3.6 engine, but after long deliberation it was decided that because the car would be so much lighter than a 993 or 993 RS, as well as lower geared, the extra torque from a 3.8 engine would be over kill and would make the car seriously over engined.

The spec we ended up building the engine to, was as a blueprinted build, where every tolerance margin by Porsche was closed to the minimum specs, the pistons were replaced with custom forged items, the con rods replaced with I-Beam lightweight items, the crank was lightened, a mild road cam was installed, titanium spring retainers, Rifle drilled valves, matched and ported heads, new standard size barrels.

The flywheel and crank were also lightened, adding up to a massive saving of rotating mass within the engine, which along with the lighter weight and yet stronger pistons and con rods, quicker throttle response was a forgone conclusion.

Lighter weight valves, valve spring retainers and cam followers were used to reduce the chance of valve bounce and increase the theoretical rev limit to 9000 RPM. The customer did not want to use 9000 RPM, but this vital modification, along with the lighter weight and stronger engine internals, the car could be tuned to 9000 RPM, which could not only yealed more power with the right camshaft, but more importantly would extend the spacing of gears and increase the cars top speed. The choice was made to utilise the available RPM, but without a camshaft choice which would make performance gains at that RPM, as that would have spoiled the engines lower rpm road manners. Instead the additional RPM was used to increase the rev range of the car, reduce gear changes to a minimum and to increase driver enjoyment due to the fabulous sound produced by a flat six engine at 9000 rpm!

As the car was receiving a 3.6 993 Varioram engine, it seemed crazy to not also use the 993 Carrera 2 transmission. Not only is this a less agucultural transmission to use than the original 911 SC transmission, but also a six speed item. However, the choice was made that the car would be much more exciting to drive, more period and quicker in sprint conditions with a 1988 911 3.2 Carrera transmission. Besides the six speed 993 transmission, with the extended rev range of the engine would cause the car to have a theoretical maximum speed way above 200 MPH, which to be honest would be extremely dangerous in a car with 1970's aerodynamics.

The reasoning behind this is that Porsche and Bosch spent a great deal of time working on the engine management system in the original 993 to work well in all conditions, throttle positions, ambient temperatures, fuel grades and altitudes. Even though the new engine goes beyond the original spec, it would be foolish to throw all this work away and start from scratch with an aftermarket stand alone engine management system, when we could just tailor the original one to match our needs with improved software and maps.

An exhaust system is not just for meeting exhaust emissions regulations, and luckily because of the age of the car, it did not require a catalytic converter. An exhaust also isnt just for releasing power, that can be done by just ensuring the flow and tuned lengths match your requirements. An exhaust is also there to feedback to the driver the tone of the engine and a well designed engine can provide power gains and produce an awesome sound. With this in mind, we opted for a custom made heat exchanger type exhaust with both headers feeding into a single twin exit exhaust system much in the same way as the original 1974 RS, but with greatly improved flow to satisfy the needs of a high reving 993 engine.

Both the 1974 RS and the 80's 911 SC had suspension from the 1960's, 70's, 80's and some would say dates as far back to the German peoples car of the 1930's origin. With this project we decided to use some custom built Koni coil overs all round, modifying the standard torsion bar suspension to swing arm and wishbone design, along with anti roll bars to stabilise it through the corners. The result was firm and controlled with tight crisp handling that even a 993 RS would be envious of.

The brakes were also upgraded on this car, using 993 Brembo callipers all round with cross drilled vented disks.

The interior of this car was finished much in the same way as the original 1974 911 RS was. Manually winding windows, a webbing pull strap for door closure, modern bucket seat design but of a period Porsche look and in this case no roll cage, but one is planned for later.

So why the 911 RSC? Well, this was the pet name for the car when it was in development, a combination of 911 SC (the original shell) and 911 RS (the basic format of car we had in mind), When collected, the owner liked the name so much, it stuck.

The owner of this car is completely extatic about this car, and have now been using it for some years and apart from regular servicing, it has needed no further work. We can not name him as like some of our customers he is a well known celebrity, but needless to say, you might see the car on television or newspapers someday.