Fuel injectors, nearly all cars have them, you probably have heard about them, but do you know what they do and how they do it?

If you now have a reason to be looking into fuel injectors, this is probably the article for you to read.

For this article, we will be concentrating on the common EV1 type injector, but all electrical fuel injectors pretty much work in the same way.

What is a fuel injector?

Pretty much as the name suggests, the fuel injector is an electrically controlled device to inject (or rather spray) a fine mist of fuel, usually there is one per cylinder in your engine, and usually they will open once every two revolutions of the engine.

The fuel is obviously needed to mix with the air being sucked into the engine, to then be ignited by the spark plugs. But for this to happen efficiently, the fuel needs to be sprayed in a fine mist, rather than just a squirt like you would get from a water pistol.

How do they work?

The engine management system (also known as an ECU, EMS or in German cars, the DME), watches the engine via its sensors, and decides when to open and close the injectors, based on how much fuel it thinks the car needs at that precise moment, switching on and off the supply of power flow through the injectors, depending on the car and engine speed, it could be doing this 600 times a second (V8 four stroke engine at 9000 rpm with sequential injection).

What are the components of a fuel injector.

There are many components within the fuel injector, some of them serviceable as part of a restoration both internally and externally, but some parts are not replaceable.

The coil within an injector is effectively copper wire wound around and around in a circle, with a hole through the middle, often this will be wound in a tube shape.

When electricity passes through the coil, it forms a temporary magnet, creating an electro magnetic field.

Usually the coil has an electrical resistance of between 2 and 10 ohms, this is what causes some injectors to be called high or low impedance, another word for electrical resistance. It is important to have fuel injectors of the correct resistance, as the wrong type will either require more electrical energy than your cars wiring or the engine management computer is happy to supply, or will in your car be to weak to accurately open and close completely or fast enough.

through the middle of the coil, a rod of good magnetic properties, but be resistant to becoming a permanent magnet, that sits normally at rest, that is until electricity passes through the coil windings.

When the coil has electricity passing through its windings, in the right direction, it will make a magnetic field with a north or south pole, and therefore will either push the armature upwards, or downwards.

The armature moving upwards, or downwards, depending on the design of fuel injector, will open or close the injector, by lifting or pushing a needle away from its seat which seals the injector.

Within the fuel injector, there is also usually a spring, which is designed to return the armature back to its rest position when the coil is no longer pushing the armature using electromagnetic force.

Usually, fuel injectors have an internal needle, which moves with the armature, and lifts away from a seat, which allows fuel to flow through a hole in the tip of the injector, also known as the injector nozzle. 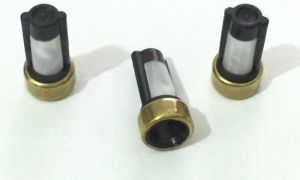 At the other end of the injector, where the fuel enters, is an internal fuel filter, this is the last stage of protection from particles in your fuel blocking the injector or even worse, being abrasive and wearing out the injector.

These filters should not be confused with the main fuel filter, which is usually between the fuel pump (near the fuel tank) and the fuel rail (which supplies the fuel injectors) 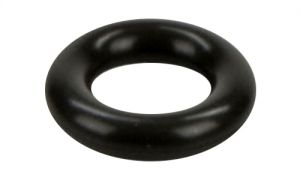 Things that can go wrong with a fuel injector.

Over time, the fuel injectors internal fuel filter baskets become clogged with debris. This will limit the amount of fuel consumed, and can cause a misfire, which typically will become worse at higher rpm or larger throttle openings. Special tools are required to replace the filter baskets within fuel injectors, and it is important that they are changed with the correct parts with the correct materials. More about this later.

As the miles pass by, the fuel injectors can become plugged up with contamination. This can be in the form of a sludge, gum, varnish or even a build up of minerals. Fuel is not perfectly pure, and is after all the processed remains of prehistoric animals and plant life, so it is no surprise that over time small particles get past the filters and slowly build up inside the injectors, limiting fuel flow, but also causing the needle to stick or be slower to move, causing more or less fuel flow than is correct.

Each of these different contaminates have different chemicals which can break them down. To do this the chemical needs to be a solvent (able to dissolve) those contaminates, and the chemical needs to be compatible with fuel (able to be soluble in fuel) but unfortunately, often the contaminants after not soluble in fuel, otherwise they would not have ended up stuck inside the fuel injector, so although fuel additives can help clean some types of contamination from injectors, they rarely will completely clean a fuel injector and sometimes will not work at all.

This is the same problem with the new wave of "on the car" fuel system cleaning machines. Often these machines temporarily replace the fuel pump and fuel tank from the circuit, and can feed the engine with a mix of fuel and harsh chemicals to intensively clean the injectors or carbon from inside the engine. However the problem with these systems, like the fuel additives, is that often the chemicals needed to clean the fuel injectors, are not compatible with fuel. With these machines your injectors and engine are just getting a more intensive cleaning process.

The only real way of cleaning contamination from inside the fuel injectors is to remove them from the car, strip them down completely, and ultrasonically clean the injectors, test them, and then rebuild them with all new consumable parts (filter baskets, seals, spacers, pintle caps etc) But to do this, you need a machine which is able to test the fuel injectors flow and latency (how quickly the injectors open and close), as well as the equipment to strip down the injectors and to fit the new parts properly. You also need one or more ultrasonic cleaners of an industrial grade, as well as some very dangerous chemicals which are extremely hazardous!

At JMG Porsche, we use a Bosch (manufacturer of Porsche injectors) and Lucas (Another injector manufacturer) approved machine for flow testing the fuel injectors. We also use special custom made rig to monitor the fuel injectors to precisely know when they have opened and closed during testing, which means we can analyse if the fuel injectors are taking too long to open and close, which can seriously impact injector performance and the amount of fuel delivered.

We also use a three stage process of cleaning the injectors, in three industrial ultrasonic cleaning machines, which use heated chemicals of different types to clean different types of contamination. This process is so intensive that it even removes paint and corrosion from the fuel injectors, but does not harm good metals or the plastics. (once the injectors are stripped down, cleaned, tested, rebuilt and tested again, we also use a special process to repaint the injectors, so they look like new and are protected from external corrosion.)

Over time, even though the fuel should not touch them, or barely touches them (apart from with multi orifice injectors), they do wear out over time, can age and crack, causing all kinds of problems with spray patterns. If not caught early enough, the cap can even fall off into the intake of the engine, and be injected by it, causing in some cases catastrophic damage.

Sometimes the windings within the coils can break. Although this is rare, it can happen. Unfortunately there is very little than can be done with this kind of failure and usually the only way to rectify the problem is with injector replacement.

In the workshop we have seen injectors fail due to the internal needle breaking or bending. Usually this will be caused either through metal fatigue, or through impact damage. With the second cause, if you have to remove your fuel injectors for any reason, you have to be very careful with how you handle them, they are very delicate. Dropping them, or putting them down nozzle first can damage the tip of the needle.

We are seeing more of this problem now. Usually caused be extreme levels of contamination inside the injectors, but also through corrosion.

In recent years fuel (in the UK and Europe for example) has had an increasing amount of Ethanol (Alcohol) blended with it. This is for environmental reasons and should lower the carbon footprint of your car. However, Ethanol is very good at absorbing water and water vapour, effectively this fuel can suck humidity out of the air! The problem is that the water is obviously corrosive to the internals of the fuel injector.

Ethanol can also attack many forms of plastics and which has meant that for rebuilding fuel injectors, it is important to make sure that the parts are Ethanol Friendly, which many parts sold for Porsche injectors are not Ethanol friendly.

Where to have your fuel injectors repaired?

We never decided we wanted to be in the business of rebuilding fuel injectors. However we had to get involved through necessity!

In years gone by, if a fuel injector failed, it was often possible to buy new ones (Only buy OEM ones, such as Bosch in the case of Porsche injectors) for not much more than the cost of rebuilding them. However Bosch have since 2014 been slowly discontinuing the manufacture of injectors for pre 1998 Porsche models, such as the 944, 924S, 928 and 911 Air cooled models, so over the last few years, we had been actively hunting for a company who could restore fuel injectors back to good working order. This was not as easy as we thought.

As a result, we had to move into the fuel injector restoration business, which was a long three year process of research, training and experimentation. The full story is listed here.

There may be a company near you who can test and restore your fuel injectors, but please use the following check list.

So concludes our initial fuel injector basics article, we hope you have found it useful.