The Porsche 924, 944 and 968 have a lot going for them, good weight distribution (good handling), reliability, interesting styling, pop up headlights (cool!) as well as reasonable power levels which allow them to keep up with much more modern Porsche models.

I own over 20 Porsche cars, including everything from a 1980's Porsche 911 Turbo, through to a modern day Porsche Boxster and yes, a few front engined, watercooled Porsche, in fact, one of each model except a 924S. So I can say, hand on heart that these are fabulous cars, and if you have never driven one, I think you should. Just make sure it is a well sorted one, because there are a few items of wear and tear which can really ruin the experience.

One problem is the condition of the gear linkages, which is what this article is all about, 924, 944 and 968 Gear linkages and how a well sorted one will massively change your driving enjoyment.

Tactile feedback is how the car communicates with you, how the steering wheel, pedals and gear lever feel as you move them, as well as how they comunicate back to you.

With a gear lever, if all the linkages are in good condition the gear selection will be precise, smooth and comunicative. Lets take a look at all those aspects.

A good precise gear shift pattern is something to behold. You could lay a laser cut H pattern plate in place of the leather gear lever gator, and the gear lever will move in a precise predictable pattern, the benefit of which is that you will be able to find gears easily, quickly and without fuss.

A worn out linkage is just the opposite, sloppy and inprecise. So much so, that gears can be harder to find and unless you have had a very precise gear selector mecahnism, you will never realise how bad the current one is.

A tight and precise gear linkage will also be smooth, without binding or changes in resistance as you change gear which can make the assembly seem vague and ultimately will reduce your confidence in driving the car.

As long as the transmission is in good working order (they nearly always are) a good gear selector assembly will not only be a joy to use, but will be another point of contact giving you feedback from the car.

A good assembly or linkage will move by slight or tiny amounts as you come on and off the power, as well as when the power is in or out of the ideal powerband of the engine, so as your hand is resting on it poised to change up or down a gear, you will feel those tiny movements through your hand, connecting you further with the car. Unfortunately, any wear within the linkage can reduce or completely remove this tactile feedback from the driveline.

So lets take a look at the gear linkage and see an overview of how it is laid out and what components are involved.

The main linkage shaft is not a problem and rarely suffers from wear. However the main gear lever (or front shifter as it is known) is prone to wear, as is the rear linkage assembly.

3. Wear in the linkages

With standard parts, even within 20,000 miles or just a couple of years the linkages pivot points begin to wear out. As well as wearing out, they begin to rust, which causes tight spots where the linkage binds up or is stiff to operate.

In particular at the front of the car, the main gear lever suffers from the main pin wearing, as you can see in this picture. It often wears into the shape of a barrel as you can see here. The pin in question should be a nice fit into a hole in the end of the main linkage shaft. As soon as the pin wears, that allows the front lever to become a sloppy fit, destroying all feedback and precision. Lets take a closer look. 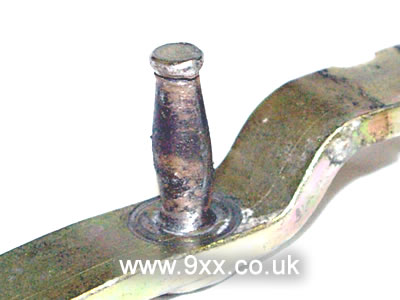 As you can see, the pin has worn into the shape of a barrel, whereas it should have two parallel sides, this uneven wear is caused by a combination of corrosion (which forms because the part is made from mild steel as well as being exposed to damp conditions) and through general wear of the gear lever applying sideways loads onto the pin when selecting 1st, 2nd, 5th and Reverse gears. 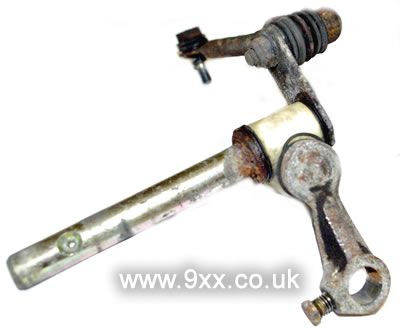 The standard factory rear linkage is made mostly of four materials, mild steel, cast iron, cast plastic and rubber. It also has four main components. In the following gaudy image we have colourised the four main components for the next explanations. 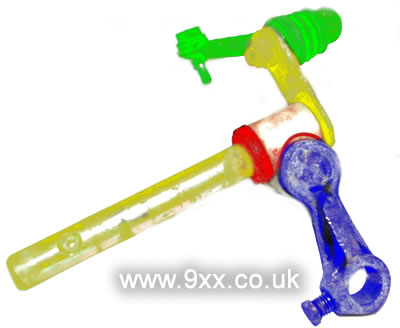 In this image you can see the yellow section. It is manufactured from mild steel. It connects to the main linkage shaft via a single bolt, and it passes through the red item which is made of plastic. The problem with this is that in time water enters the gap between the mild steel and plastic, causes corrosion of the mild steel, which then acts as an abrasive against the plastic, the result is the plastic section worn out and loose, as well as in some cases the yellow item can no longer pivot easily inside the red section. If you look in the previous picture, you will notice an abundance of rust where mild steel meets the cast plastic part.

The blue section is what actually connects to the transmission. It is made from cast iron and does not rust. However it has a mild steel pin, which passes again through the cast plastic part (red in the diagram) and causes wear for all the same reasons as with the previous (yellow) section.

Lastly you have the area coloured in green. This section is known as the cross brace. it is made from pressed mild steel, it rusts, however this is not the problem, the problem is that this part is designed to anchor the whole assembly against the transmission, to project the force applied to the assembly into changing gear, rather than into just moving the whole assembly. However, this section is connected to the transmission and the yellow coloured item by the use of rubber mounts. In time, rubber degrades, splits and can even fall away, completely ruining the quality of the gear shift.

Now that you have a good understanding of how the 924, 944 and 968 gear linkage works, and why it is probably not providing the best driving experience to you, what can be done about the issue?

The first option would be to replace the items with new factory items. Which would typically cost about £30 for the front gear lever, and about £130 for the rear linkage assembly for the parts. However, in time, possibly as soon as 20,000 miles or within 5 years the quality of the gear selection will again degrade.

The only other option would be to replace the parts with further upgraded parts which will not be susceptible to wear, corrosion and maybe offer a better design than the original parts... But that is a topic for the next article in this series,,, 924, 944, 968 Gear shift issues- Part Two