Welcome back to our short series of articles about the Porsche 924, 944 and 968 Gear linkages, their issues, improved parts and in this article we will be looking into quick shift kits!

So what is a quick shift kit?

Over the years, we at JMG Porsche have modified thousands of cars, including fitting just about every brand of quick shift for every model of Porsche ever made. However, we were never totally impressed with either the results or the build quality.

In 2002 JMG Porsche had just relocated back to the UK the previous year and was operating from a very small workshop that some of our loyal customers may remember well. We were just rediscovering what UK suppliers for aftermarket parts could supply. So when a good customer with a heavily modified 944 Turbo had dropped off his car and asked us to install a quick shift kit he had bought on the internet from a well known UK Porsche parts supplier, we were not impressed with what we found in a bag on the passenger seat.

What greeted us was what seemed to be a bent 13mm bar, with a poorly welded ball joint on the side that re-used the standard (tired) 944 rear linkage cross brace, it looked a mess and when installed it did indeed shorten the throw of the gear lever, but it felt overly notchy, it was binding up and no amount of lubrication or adjustment (there was none) could improve it.. So the customer left us, with the kit installed and a promise that we would develop our own that he could be the test pilot of, free of charge.

We had just finished developing the 9XX FrontShift and it had been welcomed by the Porsche 924 and 944 community, but we never expected the rear linkage offering from 9XX to take us almost 12 months to develop. But it was worth it, what resulted was what we believe is the best, smoothest quick shift available even now, even before you take into account the following 10 years of evolution and development. 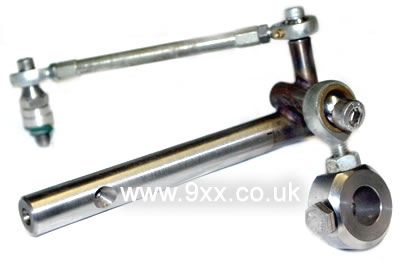 The end product was the RoadShift (about 20% shorter throw than standard at the gear knob) and the RaceShift (Almost 50% shorter throw at the gear knob). Mark, the first test customer was delighted, so eventually, we went into production in small volumes for the next 10 years with minor improvements with each batch, and never a single complaint or warranty replacement.

Expensive to produce, due to its complete manufacture using aircraft quality spherical bearing rose joints, billet stainless steel and aluminium components, this product is still available today and is regarded as the ultimate quick shift known as the RoadShiftPro and RaceShiftPro. However we now also offer a new range of quick shifts, every bit as good, easier to produce, slightly less overkill on the exotic components, but just as nice a shift feel and just as reliable.

As you have probably already read the previous two articles (if not read them now!) you will have seen that 9XX have developed the PrecisionShift, produced to give the standard look and gear throw, but with improved driver feedback, feel and precision. What we did not mention that we designed the new RoadShift, RaceShift and PrecisionShift all at the same time, to allow some parts to be interchangeable between all three products, and therefore keep production costs down just a little, without a compromise on the quality, we also listened to feedback from customers who had installed an original 9XX RoadShift or RaceShift and decided to make it even easier to adjust.

So lets take another look at the PrecisionShift, just for reference. 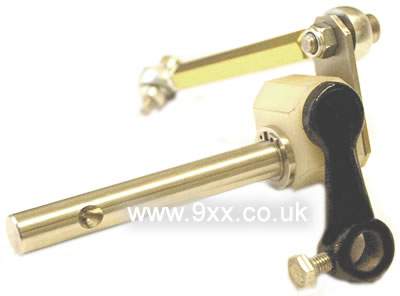 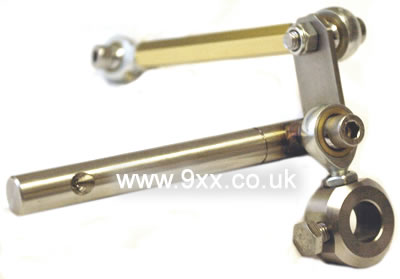 As you can see, the 9XX RaceShift shown here (RoadShift is almost identical) and the PrecisionShift still have the same quality build of the original 9XX RoadShift and RaceShift, it has been designed to use some of the core parts as the PrecisionShift.

So what is involved in the installation of these three new 9XX products?

One of the benefits of all these products is that they also allow for the adjustment of the centre point of where the gear lever inside the car is positioned at rest, and therefore the relative centre point of the position of all the gears. The adjustment could not be simpler. Just undo both the lock nuts on the cross brace (if you do not know what that is, read the other articles in this series) and spin the central shaft in the cross-brace, one way will move the gear lever left, the other way will move it right, when you are happy with the position, just tighten the two lock nuts and you are done!

So how do you buy one of these items?

Over the next few days they will become available on the online shop (click on mail-order in the menu system).

Some say he is the love child of a Cray XMP supercomputer of the 1980's and a Sinclair C5. That he can hear the tinkling of binary traveling through the internet.

All we know is he is the webmaster of JMG Porsche.

More in this category: « Upgrading Audio - Porsche 996 and Boxster (986) Speakers Part 1 Traction, less can be more »
back to top
Copyright JMG Porsche Ltd 2020